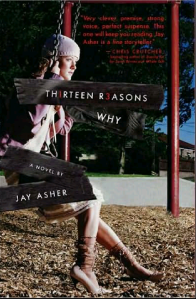 This novel got me hooked on since page 1. Even though I finished it in like 2 sittings within a day (I didn’t want to put it down) yet I am giving it 3  hearts.

Hanna Baker was a newcomer in the town and school. Her reputation was tarnished by the guy (her senior) during her first days in the town. Later on, she was accused of betrayal by her new friend that she stole her guy (all three of them are classmates). That guy sort of used Hanna to make her ex jealous and to get back her. Hanna was devastated and failed to convince her friend.

She witnessed horrible things to crush her soul. She was continuously abused by the people around her. She tried to give hints as to what she is going through. And that she was depressed and slowly losing hope. She couldn’t open up because people might think she is seeking attention. She kept it all inside until she couldn’t anymore and decided to end her life.

She decribed those incidents as “snowball effect”. Starting from the first incident to the last, everything was connected. Everyone was responsible. She wanted them to know how badly they affected her life to the point where there was no turning back. So before committing suicide, she recorded 13 reasons on the tapes with recording about 1 person on each side of the audio cassette. After listening, each one of them should send the tapes to the next person on the list.

I think Hanna Baker was suicidal and had psychological issues but she realized that too late. She was in denial of her mental condition. She denied help of those who wanted to help her like Clay and even Mr. Porter. Except for the few like Bryce Walker, Zach Dempsey and Courteney Crimsen, I don’t see Hanna was right blaming others for her suicide.

I get that school and high school could be a problem period for some (or many) people.  Those who are sensitive or very emotional suffer the most. But Hanna didn’t occur like any over-sensitive or emotional girl to me. She was insecure, yes. Over-sensitive – no. Emotional – absolutely not. She was fun-loving, calm and collected. She was smart enough to know whats wrong and whats right for her. Then why did she go back to the people she already knew she couldn’t trust. She herself let them harm her. Then why blame others?

I absolutely loved Clay Jensen. I wish he had never left Hanna alone even when she asked him to.

The idea of this novel was unique. Sending audio tapes to those who were the reasons of one’s suicide so they could know how their actions affected others lives – genius! (I hope teens do not glorify suicide by reading this book and watching the TV series).

This is a good book to read. Especially for teens and highschoolers. I hope people do realize how their words, gossips or little actions scar other’s lives.

Those who are suicidal, should seek help. There is no shame in asking for help or confiding your darkest fears to a counsellor or a trusted friend. Life is a precious gift and both good and bad times pass. Life is all about ups and downs. Killing yourself may end your suffering but it passes the everlasting pain to those who love you.

Those who see troubled souls around them should come forward to help without pitying them and making them uncomfortable, vulnerable or hard to open.

And please accept help when offered. That doesn’t make you weak.

20 thoughts on “Book Review: Thirteen Reasons Why by Jay Asher”